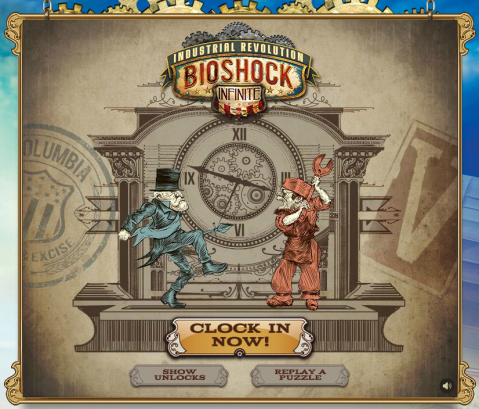 Before Industrial Revolution, Lazy 8 might best have been known for their similarly themed puzzle game, COGS. In COGS, players have to solve interlocking gear, pipe, and mechanical puzzles around three-dimensional objects. COGS is one of those games that for the period of a few years seemed to show up everywhere, available on phones and PCs and tablets every time a new platform launched. The game has been a finalist at IndieCade and the Independent Games Festival, and won the 2009 Indie Game Challenge.

And somewhere along the way, the game caught Irrational’s eye.

“They came to me with some ideas already in mind of what they wanted a stand-alone BioShock puzzle game to look like,” recalls Rob Jagnow, founder of Lazy 8 Studios. The idea was to have a separate BioShock Infinite experience that could help introduce the world to the themes, locations, and players of the ‘big game.’ The core puzzle design was completed almost two years ago, and while we reordered the difficulty ramp a bit, all in all, the designs have stayed intact.”

While many of the unlocks can be grabbed easily, to get them all, you’ll need to complete the whole game. And the rewards are more than just unlocks. Each puzzle tasks the player with connecting a power source to an output, using various gears and pulleys. Solving the puzzle puts a virtual factory to work making materiel that the player can then choose to send to the Founders or the Vox. Based on the choices the player makes, the story told in Industrial Revolution will change, providing a unique opportunity for storytelling.

So while players go through an increasingly complex series of mechanical puzzles, they also influence a short story being told within the game through newspaper clippings and propaganda posters. Long before they fire up BioShock Infinite, Industrial Revolution players will have seen the struggle unfold between Columbia’s founders and the Vox Populi. Before they ever meet Elizabeth and Booker, they’ll get to know Daisy Fitzroy, leader of Columbia’s resistance. 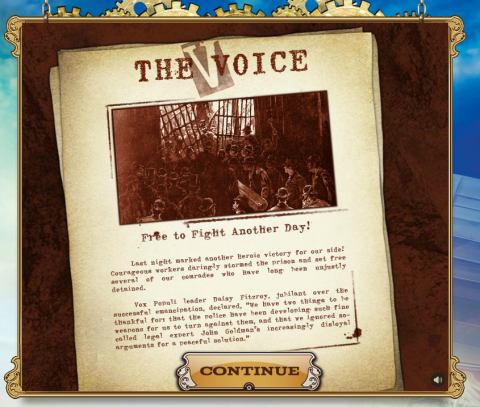 But even more than that, they will have influenced that conflict and earned bonuses they can carry into the very first levels of BioShock Infinite. “It’s great to bring a story in,” says Jagnow. “It took a lot of back-and-forth, but the game now tells the story of the 12 years prior to what happens in BioShock Infinite.”