From the Vault: Evolution Part 3

In the last installment of “From the Vault: Evolution,” we looked at how a simple storefront went from crude geometry to a lavishly decorated art-deco showpiece, complete with inside jokes and homages. In our first installment, we talked about the atrium of Sander Cohen’s Fort Frolic as a central space that grew into a story- and combat hub for the game.

But sometimes a space is created primarily to deliver a single image, a single story-heavy moment of the game. Such was the case with Sander Cohen’s Fleet Hall. 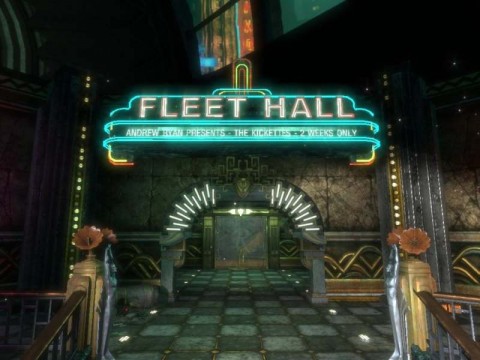 “This is Fleet Hall,” introduces Bill Gardner, Lead Level Designer on BioShock. “It’s another example of a space that didn’t really change a ton over the course of development, although it seems very visually different from start to finish.”

Here’s an early shot from the balcony of Fleet Hall: 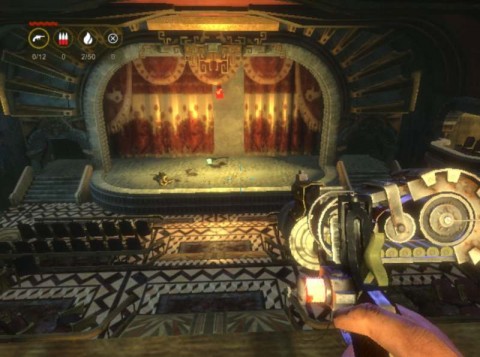 And another from the audience: 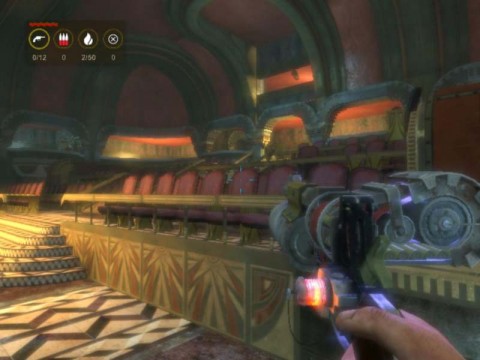 These initial walk-through screenshots seem bright, almost welcoming and cheerful, a far cry from the nightmare that Sander Cohen presents us in the final game. That’s not uncommon for an early pass, because it’s highly unusual for a space to remain as intact as Fleet Hall.

“In general, the architecture’s going to change so much as the game develops, so lighting is one of the very last things we do. Early on, it’s a bit of wasted time—you can do a quick and dirty pass, and that’s what these shots are.”

Ken Levine and his team notoriously continue to work on story right up until the end (rather than working from a locked-in-stone script before production begins), and this allows the design team much more flexibility in creating the right environment.

“It’s about finding who your stars are,” explains Gardner. “In this case, we started with just a box room. I didn’t have anything to really go on. It was just a bunch of debris. I just grabbed seats and made a theatre. But originally, it didn’t have a purpose, or even make sense—at one point, I think, you got here through the bathroom.”

But ultimately, the team always focuses on making any space—a building, a theater, a doorway—have a viable reason for being in the world. “Ken always pushes us to base all the geometry we’re building on real-world architecture. We’ve come a long way from just building combat spaces based on the flow or the script.”

While Fleet Hall could play host to an encounter or two, its real value was showcasing one of the most striking scenes in all of BioShock: two tableaux that cast Cohen’s madness in sharp relief. “The narrative guys really got their Van Gogh-meets-crazy-cat-lady on here.  Jordan, Nate, and Stephen took the theatrics to the extreme.” 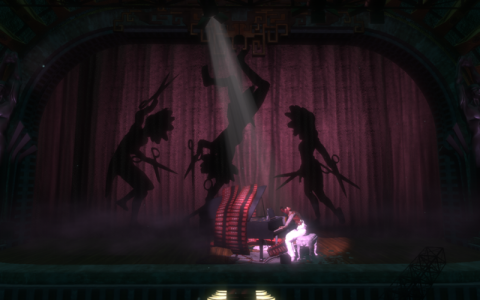 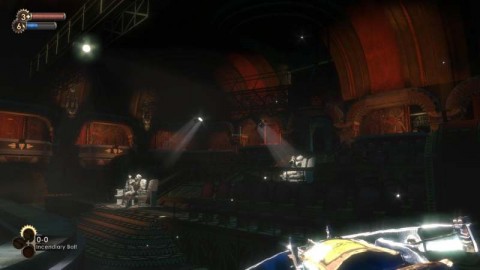 “Here we see the two vignettes, and the interesting thing is that the space changes based on when you come in,” explains Gardner. “Initially, you’ve got the spotlights and that’s it. Then, when you come in and take your picture, the house lights come up and the whole space changes its feel. The biggest thing there is texture and lighting.”

Ultimately, those are the biggest tricks in the level designer’s toolbox, concludes Gardner. “We could take this space, for instance, and make it feel like it was from an entirely different level. We could just swap out the archways, get rid of a few big architectural elements, change the textures and the lighting, and you’d feel like you were in an entirely unfamiliar space.”