From the Vault: Evolution

From The Vault: Evolution is a new series in which we look at classic scenes from Irrational Games and track how they progressed from original concepts to final polished environments. It offers insight into the evolution of our signature spaces, as they grew into the playgrounds and battlegrounds we’ve come to know and love.

There is no better place to start than Rapture’s subaquatic shopping mall, Fort Frolic.

“What the heck does it feel like to be in a mall at the bottom of the sea?” asks Bill Gardner, Lead Level Designer on BioShock. “It’s an atrium, so there’s not a whole lot of crazy visual interest, or a lot of really out-there geometry. So we started with what real malls look like.” 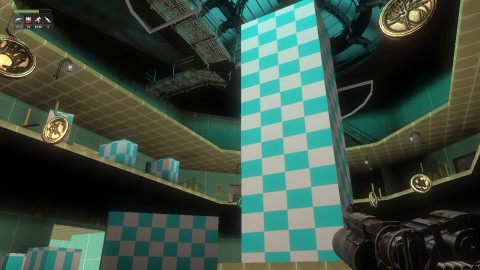 But unlike a real mall, this was one in which players would be fighting for their lives. That made for some fascinating design choices right off the bat.

“It came down to what would be interesting, and the most interesting part of a mall to fight in is the atrium space,” recalls Gardner. “We could do any number of stores or halls, but I thought this was going to be a great space to fight in. From there we just pared it down, more and more.”

The trimming of complexity comes at the same time that artists are adding visual interest to the space,  creating landmarks, and starting to understand not just the tactical interest of Fort Frolic, but its place in the story and the feel of its environment. It’s a collaborative balancing act of art and design considerations. 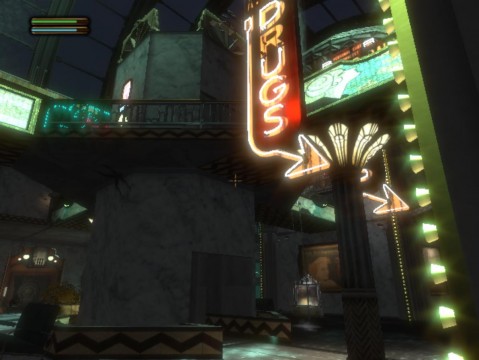 “This screenshot was from before the time of E3 2006. We all felt like we had something,” recalls Gardner. But the distinctive art style of BioShock had yet to completely gel. “You can see there’s not a whole lot of deco here. You can also see a lot of pieces that are still vestigial. The neon sign, for instance, is a remnant of a time when Rapture was a lot more industrial. You have a little bit of a mish-mash, but you can start to see elements of the deco feel, or at least the seed of the deco feel.”

And that mish-mash is how a space evolves.  Element by element, the art and level design teams work together to upgrade, improve and fine tune each element of the space until the space serves the game.

As Fort Frolic started to feel like a real place, the story of its lunatic mastermind, Sander Cohen, began to change as well. Cohen, the mad artist who sends players on a photographic treasure hunt of the macabre, changed how the space evolved.

“It’s really difficult in a BioShock game to figure out what your stars are. What is the focus of this space?” muses Gardner. “Again, we designed Fort Frolic originally to be not just a quest hub, but also where the real meat of the combat was going to be.”

How that combat played out, however, was informed as much by Cohen as by Fort Frolic itself. “Jordan Thomas [designer on BioShock] was able to introduce much more interesting combats, with the elaborate dance sequence. Having a bunch of melee guys come at out at you, timed right to the music, worked out perfectly.”

But the most iconic aspects of Fort Frolic – Sander Cohen’s stairwell and ‘art installation’ – came even later in the process. 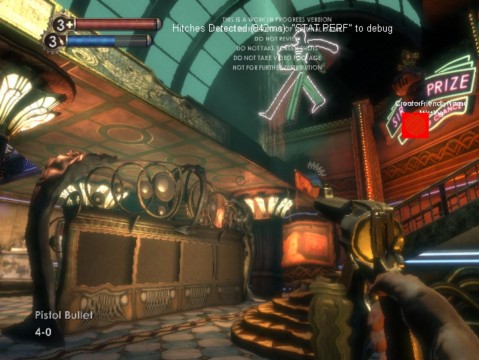 “As we got into it,” says Gardner, “we needed to focus much more on how this is Sander Cohen’s big show, when he comes down the stairs. Ken always referenced Sunset Blvd when we talked about the scene.”

The second set piece that evolved dramatically was the collection of frames; you can see an early version above, at the bottom of the stairs. “Frankly it was pretty bland,” admits Gardner. “You can’t have a boring blank palette that the player’s going to fill with pictures. We needed the whole frame to be part of the art.”

And with that final missing piece, Fort Frolic gelled. 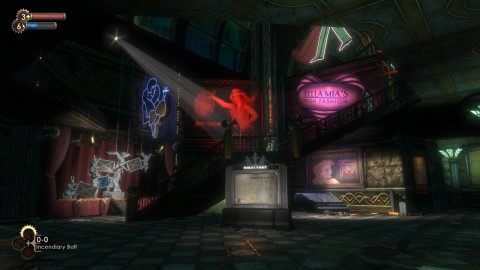 “Stage management is very important to us,” concludes Gardner. “When you’re building a space like this, you have all these different things that are coming to a head. You’ve got your introduction to the space, that needs to establish what Fort Frolic is all about. You come in and all the lights come on, and we really have to sell the purpose of the space. We also have to sell Sander Cohen, and we have to draw the player to the main quest object, and make sure the gameplay is interesting every time you return.”

In the end, Fort Frolic remains one of the locations Gardner’s most proud of. “I think this is probably the most theatrical section of the game.”

Stay tuned for future installments, where we’ll look at how other signature spaces developed in BioShock.