From the Vault: The Audio Incident 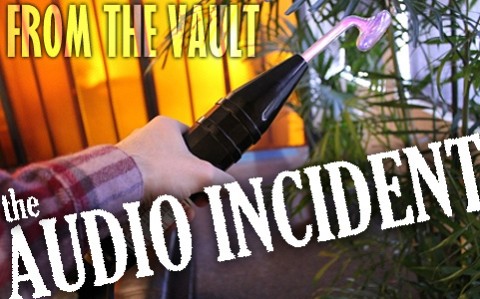 The Irrational audio department is hiding a secret—trying to keep the details of a certain incident hidden from the rest of the team. What they didn’t count on was the public release of a telling sound recording.

The story begins with a bizarre, arcane device: the Master Violet Ray. Marketed in the early 20th century as a miracle device cure for just about any ailment, the Violet Ray is little more than a handle that powers a glass tube attachment filled with neon, argon, or helium. Touching a powered Violet Ray creates a tingling sensation whose intensity can be increased with a power dial.

Audio team members Jeff Seamster and Pat Balthrop acquired the device from senior designer Forrest Dowling. They were hoping simply to record some unique electrical sounds for BioShock Infinite, but the evidence shows they got more than they bargained for:

The following interview was conducted following the incident to shine further light on the matter:

Sarah Rosa: What were your impressions of the device?

Jeff Seamster: There’s a manual that tells you what it’s supposed to be for, but when you pull it out of the box it looks like an implement of torture or something meant to hurt a cow.

Jeff: Electricity is such a difficult sound effect to get real material for, so every time we get the opportunity to record some electricity, we say, “Yes, get that!”

Chris: So before you recorded it, you had never turned it up that high?

Jeff: No. We were totally noob about this device. We had no idea what we were doing and yes it had a manual and no we did not read that manual.

Sarah: And she said she told you guys to keep it turned down.

Sarah: Are you lying to me?

Jeff: Obviously the first thing we’re going to do is turn it up to the max and see how much juice we can get out of it. 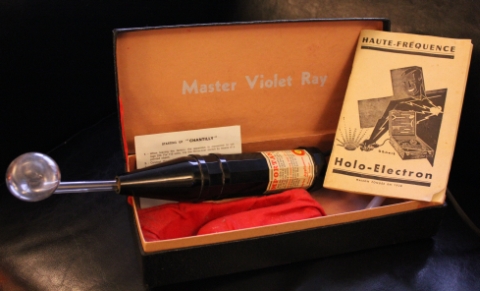 Pat: Scott [Haraldsen, audio lead] was smart. He wouldn’t even go into the booth. He ran the recording session.

Jeff: It’s not very high-tech. It’s just got a two-prong plug. Important: not grounded.  There’s a knob with no indicator; you don’t know how high you’re turning it. You can keep turning it and you have no idea what’s happening. It’s just a weird thing with a black handle and something is happening with electricity on the inside.

The attachments were very exciting, because they have the cool purple light inside the glass like one of those plasma balls you put your hands on.

Chris: So you did start to get a warning of what it could do.

Jeff: We heard you could put it right up to the skin, but it was just a low hissy buzz, so we decided, “Let’s pump up the jams!” Then we were getting some nice arcs. You could hold your finger a couple inches away from it and get some good “zot!” sounds.

Pat picked up the sheet metal, and I think my knee was resting against Pat’s leg at the time…

Sarah: So you were both conducting.

Jeff: …Yes. We got the mic really close to the sheet metal, then there was a huge spark. It must have been a four-inch long spark. Then it arcs over to the metal, I feel a huge jolt, and my leg seizes up. Pat flings back because he’s been completely electrocuted. We’re both yelling and trying to see if we have any burns or permanent damage, we can hear Scott laughing at us through the headphones, and Pat is still sitting there with this sheet metal going, “Get this shit away from me, man!”

At that point we pulled the plug.

Pat: But it was worth it, because it sounded awesome.

Chris: Are you going to use the sound? It’s a pretty amazing sound.

Jeff: Of course we are.