March From the Vault

This month’s From the Vault presents some of the monsters from BioShock that might have been.  These creatures were designed early in the development of BioShock and while they may not have made the final cut, they were important stepping stones on the path to the game’s final aesthetic.

The “Yam Hand” character went through many iterations during the early development of BioShock. Artist Robb Waters had this to say about his creation:  “One thing I liked about the character was his strange and unique head shape.  It kind of made you wonder what the heck was going on under that dingy burlap sack.” 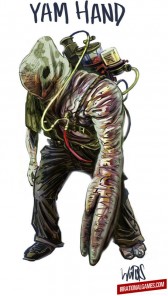 During one early stage of BioShock’s production, oversized and disproportionate limbs were all the fashion. 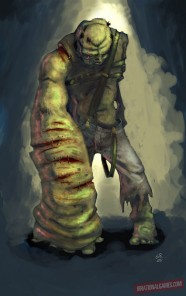 Perhaps the Jelly Man shows some long-term side effects of ADAM abuse.   Maybe he’s showing why humans and jellyfish aren’t as genetically compatible as some Rapture scientists had envisioned.    Or possibly this is what happens when a Splicer decides to mutate into a delightful breakfast spread.  Who knows?   Regardless, this guy melted before he could be incorporated into BioShock.

This is one of the more gruesome pieces of concept work to emerge during work on BioShock – a huge insect slowly growing from within a human being and taking over the physical form.   And as sickening as this image is, its true power comes from what’s implied:  what was it like for the original person transitioning to this state of organic fusion?   And what mash-up of man and bug is hidden under that cloth?

This visual was of great help in selling BioShock to publishers. 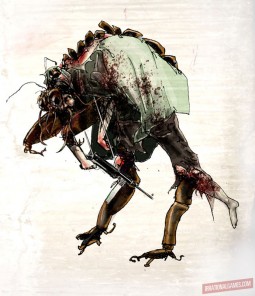 Another take on the fused-parasite idea – different bug, same revolting results.   This one is perhaps even more disturbing, when you realize that having a grub as thick as a telephone pole growing through the guy’s chest isn’t preventing him from having his gun locked and loaded.   You have to wonder what’s going through his head. 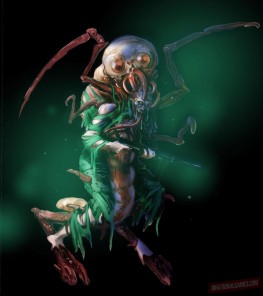