In the heat of creating BioShock Infinite, every department in the studio is working hard. Not all of that work takes place in the studio, however. When it comes to creating the game’s sound effects, the Irrational Games audio department occasionally has to go into the wild. Most recently, they took a trip to the gun range.  It was a tough job, but somebody had to do it. 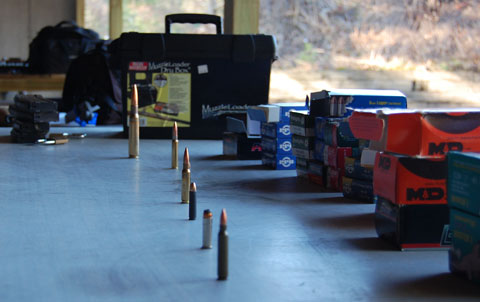 It all started with a shopping list. “We brought the range master in and showed him the weapons we had in our game” says Scott Haraldsen, Audio Lead. “He then came up with the guns he thought would provide the desired sounds.” Of course, the world of Columbia isn’t a mirror image of 1912 America, and even if it were, finding perfectly operational 1912 era guns and ammunition isn’t easy. “We didn’t necessarily use the exact guns, but rather, guns that gave us the sounds we were looking for. We got a list, got coordinated, and went out and had a blast … literally.”

The audio team not only set up the field recordings, they fired the weapons personally.  Just to be sure they got the right sound, of course. Of the weapons at their disposal, they were particularly excited to fire a Barrett M82 .50 caliber sniper rifle – and with good reason. The M82 is one of the most well-known firearms in the world, in part because of its imposing ammunition, the 4-inch long 50 caliber Browning machine gun round. This go-to long range sniper rifle for the U.S. military represents a level of power that is not easily found elsewhere, with an effective range of over a mile.

Imagine the reaction, then, of Audio Director, Patrick Balthrop, who had never fired a gun. Any gun. 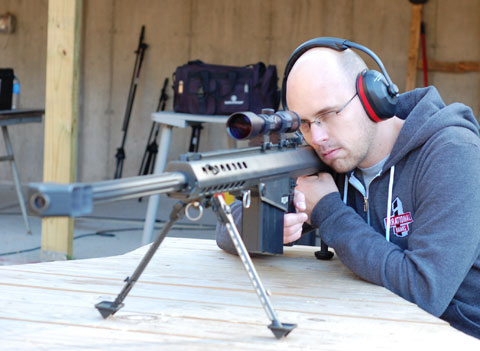 “When I shot that gun, I was in position. I had that thing right up against my shoulder,” recalls Balthrop. “When I pulled the trigger, the chair I was sitting on moved back about six inches.” It was like learning to drive in a car that just happens to be a Maserati.

“It’s not even hearing,” says Music Director, Jim Bonney. “It’s experiencing.” The team had never experienced anything as loud as the .50 cal, and with each shot thundering from the sniper rifle, they’d jump and giggle. Despite the mental preparations and expectations, the shockwave from the Barrett would get the better of everyone; time and again.

Even though the team was excited about the Barrett, it wasn’t necessarily the team’s favorite firearm from their hard-working day of shooting – and recording – at the gun range.    For Senior Sound Designer, Jeff Seamster, that honor went to the Mauser C-96 pistol, a semi-automatic pistol first produced in 1896. Until the introduction of the .357 Magnum, it was the most powerful handgun in the world, but nobody on the team had ever even seen one in real life. Though the final sound effects will be enhanced and crafted from these original recordings, the Mauser was unlike any other weapon on the range that day, and will contribute a unique element to Infinite’s sound arsenal.

However, it was a weapon familiar to any gamer that Jeff may remember most: the AR-15. A civilian version of the military M16, this particular AR-16 was nicknamed “Skittles,” and it was a crowd pleaser.  “It was the closest thing to the weaponry in modern combat that we shot,” Seamster explains. “Any of us who has played Call of Duty or Battlefield know this gun from using it in-game. We were just wowed. This is it – this is a gun that I’ve only fired before in a video game. It’s something else.”

Be sure to check back next week for part three, in which our heroes put it all together.