Beginning Tuesday, March 25th, 2014, BioShock Infinite: Burial at Sea – Episode Two will be available for download. Please remember that downloads for your particular platform / region may not occur directly after midnight, so keep checking back for updated release timings. Don’t forget to pick up your BioShock Infinite Season Pass to get Clash in the Clouds and Burial at Sea at a significant discount. 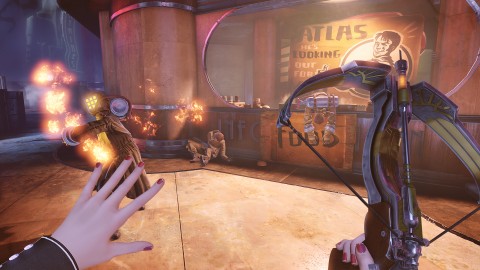 BioShock Infinite: Burial at Sea – Episode Two is built almost entirely from scratch by Irrational Games, the studio behind the original BioShock and BioShock Infinite. The narrative of this add-on content pack concludes the storyline of BioShock Infinite and Burial at Sea, as seen through the eyes of a new player character, Elizabeth, and features all-new stealth-oriented gameplay, as well as new weapons and modes.

*BioShock Infinite is not included in this add-on content, but is required to play all of the included content.

From the creators of the highest-rated first-person shooter of all time**, BioShock, BioShock Infinite puts players in the shoes of U.S. Cavalry veteran turned hired gun, Booker DeWitt. Indebted to the wrong people and with his life on the line, DeWitt has only one opportunity to wipe his slate clean. He must rescue Elizabeth, a mysterious girl imprisoned since childhood and locked up in the flying city of Columbia. Forced to trust one another, Booker and Elizabeth form a powerful bond during their daring escape. Together, they learn to harness an expanding arsenal of weapons and abilities, as they fight on zeppelins in the clouds, along high-speed Sky-Lines, and down in the streets of Columbia, all while surviving the threats of the air-city and uncovering its dark secret.

**Based on Metacritic average ranking across available platforms.

BioShock Infinite: Burial at Sea – Episode Two can be purchased as part of the BioShock Infinite Season Pass, which is priced at $19.99. The Season Pass, which is available for purchase via online marketplaces on all available platforms, contains over $35 of playable content in three add-on packs for $19.99, including both Burial at Sea episodes, the previously released Clash in the Clouds add-on pack, as well as the Early Bird Special Pack that has powerful weapon upgrades, exclusive gold weapon skins and infusion bottles to upgrade player abilities. BioShock Infinite: Burial at Sea – Episode 2 can also be purchased separately for $14.99.

BioShock Infinite is rated M for Mature by the ESRB and is available now for the Xbox 360, PS3™, Mac®, and Windows PC. For the latest news and information on BioShock Infinite, become a fan on Facebook and follow Irrational Games on Twitter.

Headquartered in New York City, Take-Two Interactive Software, Inc. is a leading developer, marketer and publisher of interactive entertainment for consumers around the globe.  The Company develops and publishes products through its two wholly-owned labels Rockstar Games and 2K.  Our products are designed for console systems, handheld gaming systems and personal computers, including smartphones and tablets, and are delivered through physical retail, digital download, online platforms and cloud streaming services.  The Company’s common stock is publicly traded on NASDAQ under the symbol TTWO. For more corporate and product information please visit our website at http://www.take2games.com.

Located near Boston, Massachusetts, Irrational Games is widely recognized as one of the industry’s leading game developers. Irrational has earned a reputation for creating story-driven, genre-defining games with award-winning hits like System Shock 2, Freedom Force, the original BioShock, and BioShock Infinite. For more information, visit http://www.irrationalgames.com.

“PlayStation” is a registered trademark of Sony Computer Entertainment Inc.

All trademarks and copyrights contained herein are the property of their respective holders.