From the Vault: Evolution Part 2

In the last installment of From The Vault: Evolution we tracked how the center of Sander Cohen’s domain in BioShock– Fort Frolic’s atrium – grew from a simple wireframe into an underwater gallery for a deeply disturbed man.  In this installment, we move from the grand staircases and dramatically large tactical spaces to something much smaller in scope – a simple elevator lobby. 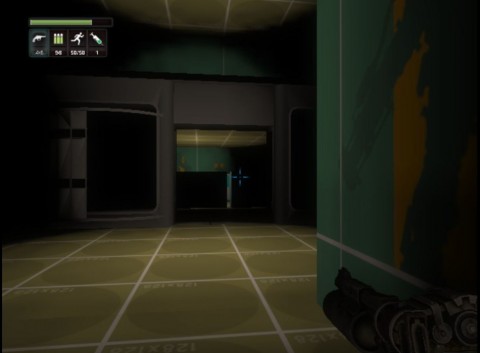 “This is obviously a very, very old shot,” explains Bill Gardner, Lead Level Designer on BioShock. “Between here and the final, the footprint hasn’t changed a ton, so it’s an example that’s strictly about dressing it up.”

From such a sparse screenshot, even die-hard BioShock fans might not recognize the location. But the space was designed primarily to be introductory, and one which could provide a little inside joke: “It’s just one little nook,” explains Gardner, a bit sheepishly. “But just as [game development studio] Looking Glass had the whole basketball Easter-egg thing,  I have doors closing on a dude’s head. It’s one of the things I always try to put in.” 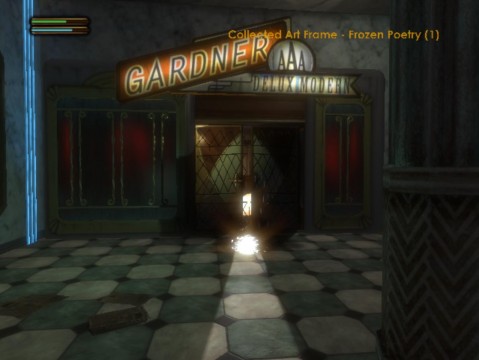 The above shot shows the storefront in its earliest stage of decoration. The broken door and the light within “Gardner’s Delux Modern” – another inside joke, of course – provide the dramatic visual elements that will define the space. Also present is one of the features most associated with Irrational’s visual style – the signage.  On BioShock, there was no one person dedicated to creating all of the signage, typography and decorative elements for Rapture.

“We’re lucky enough that all of our artists just get it,” explains Gardner. “Everyone contributed to typography and signage and that sort of thing.” That’s not to say that it was a free-for-all. Early on, the art team established guidelines.  “We put together an art bible. We put together what works and what doesn’t work, the do’s and don’ts.” 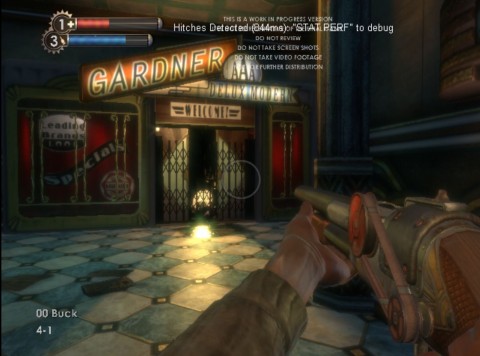 It’s partly for this reason that even as this space evolved, becoming more complex, and more heavily decorated, the core typographic and signage elements remained intact – even in a space that saw constant revision over a two-and-a-half year development cycle. 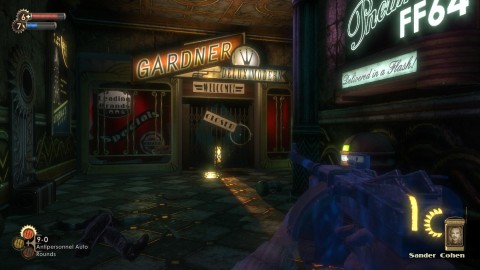 As with most spaces in BioShock, the final lighting passes completed the overall effect, in this case adding a dark, brooding quality to a small corner of Fort Frolic.  “The flow, the architecture, the texture – they’re really almost identical even a year and a half out from ship.  The lighting is the last thing, and it’s sort of the trickiest part. Every single part of the art group has to be firing on all cylinders to get a space to gel.”

As the team has moved onto the much larger challenge presented by BioShock Infinite’s open spaces and unique history, the team itself has gotten larger as well.  “We certainly have more specialists on BioShock Infinite,” explains Gardner.  “We have specialists on concept and implementation of weapons, of signage. But even with that push toward specialization, we look at every single detail with a ridiculous amount of scrutiny.”