“You can’t have a society without a battle of ideas.”

That’s the crux of this Kotaku interview with Irrational creative director Ken Levine. Kotaku’s Stephen Totilo delves into the inspirations that underpin BioShock Infinite‘s city of Columbia and the forces that are tearing it apart. Those disparate inspirations include historical labor conflicts, Sinclair Lewis’ It Can’t Happen Here, Ridley Scott’s film Alien, and…a picture of a dead horse. 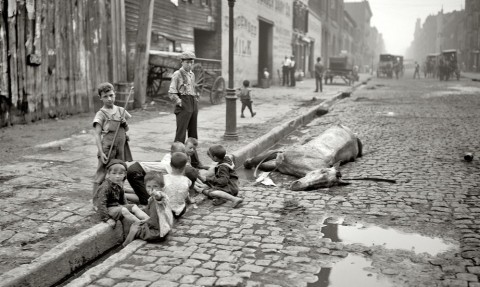 Touching on some ground covered during Irrational’s PAX East panel on world creation, Ken described how BioShock Infinite once revolved around “a rift between technologists and Luddites.” That conflict didn’t quite hit home, however, and the “battle of ideas” eventually coalesced into the current factional battle between the city’s nationalist Founders and the insurgent Vox Populi.

The interview is punctuated with historical photography captioned by art director Nate Wells, who explains how the reference material informs BioShock Infinite‘s development–both in terms of direct visual inspiration as well as environmental storytelling methods.

Nate’s moustache does not make an appearance.