What’s that, Booker? You want to slam that Sky-Hook in my face?

In the latest PC Gamer, you’re going to feel the intense rush of a Sky-Hook to your FACE! Either that, or an awesome six-page feature packed with BioShock Infinite details and interview material from a quartet of Irrational folks: creative director Ken Levine, director of product development Tim Gerritsen, art director Nate Wells, and lead artist Shawn Robertson. 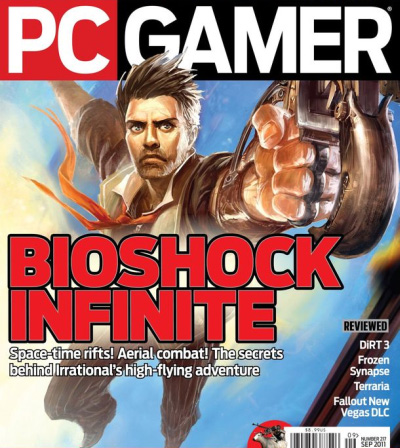 There’s a lot of roundtable discussion about the influences behind Infinite, and the development choices and design evolution that led to the E3 gameplay demonstration. And vigors. There’s a whole sidebar about ’em. You’ve already seen Murder of Crows–that’s the bird-based crowd control vigor you saw for the first time in last year’s gameplay demo. You send forth a flock of particularly aggressive crows to temporarily incapacitate a group of your foes.

You may not be as familiar with Bucking Bronco. That’s the vigor you saw Booker use in the latest gameplay demo to forcibly eject his enemies out from behind cover with a rolling wave of turbulent force. And after you’ve tossed enemies up with Bucking Bronco, you can extend their forced airborne relaxation session by juggling them. With bullets.

And finally, while it’s common knowledge that dead men tell no tales, it’s a slightly less-well-worn (but equally true) maxim that dead men fire no weapons. With the Weapon Slave vigor, you can put those abandoned arms to good use by turning them into your own personal automated turrets that hunt down those enemies who have not yet discarded their own lives (and guns).

As always in game development, these details are subject to change. And rest assured–there are more vigors to come, but you’ll have to wait for more details. In the meantime, why not pick up the new PC Gamer and check out the BioShock Infinite cover story. If you don’t, you’ll disappoint Shawn and Nate, and do you really want that on your conscience? Just look at those faces. 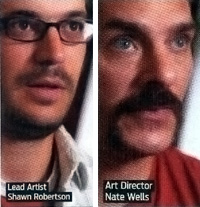